Whiteness Won’t Be Wished Away 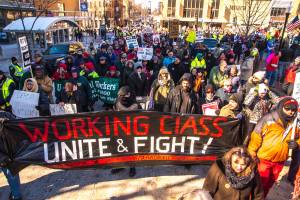 Ninth in the series: Organize the White Working Class!

White workers have at least a dual identity — we are both workers and white. The history of white working-class community organizing as told by Amy Sonnie and James Tracy in Hillbilly Nationalists, Urban Race Rebels, and Black Power: Community Organizing in Radical Times suggests that on-the-ground organizing requires us to engage white identity.  We will not succeed in “organizing our own” unless we reckon with the whole person as they actually live and think.

In most radical working-class or Marxist thinking, class is the primary factor cutting across all other positions such as race, gender, sexuality, or empire. In this view, class is not really an identity but a relation to production, that is to say, an objective fact waiting to be discovered as science discovers nature. This approach imagines workers as economic beings that should react rationally to their class interest if only explained or experienced in just the right way.

I do not dismiss the important work done by socialists or others in addressing race issues. Instead, I hope to reflect on history and enrich organizing method and strategy for anyone aiming to confront the way that race and class are tangled and intertwined. Most socialist groups today do highlight the struggles of women, gays and lesbians, blacks and latinx people and embrace “intersectionality” but organized around class as the “primary contradiction.”

The liberal Democratic Party version does the opposite. Class more or less disappears from liberal conceptions of intersectionality and identity. If the Democrats were to put class into the mix, then it might lead to a kind of identity politics subversive of the two-party system itself. Once class is invisible, poor whites become objects of immense condescension; deplorable failures with no excuse other than their own stupidity and laziness. After all, we enjoyed all the privileges but are still losers. Right?

The history in Hillbilly Nationalists suggest a different approach. Class does cut deep sure enough, just not all the way to the bone. JOIN and Young Patriots and Rising Up Angry appeal to white workers not simply as workers but also as “dislocated hillbillies.” O4O and White Lightning tapped into the rich reservoir of European and immigrant labor history. Music, breaking bread, hanging out at the pool hall, street gangs, even the pop culture identities of “greasers” carried class consciousness for those who know how to translate one language into another.

Organizers face a long and winding road.  We travel back and forth between class and cultural identity. That road turns around race every bit as much as class. For white workers, class interest will lead the way to other things. But, race is so deeply a part how class works in the U.S. that it is impossible to separate the two.

People of color, gays and lesbians, sexually minorities, the young, soldiers and veterans, environmentalists — whatever their class background — may find ideas other than class more inspiring and other roads more compelling. And, there is lots of evidence to suggest that there is a transformative core to the ideals behind every social movement.  Each vantage point is as equally indispensable to the revolutionary project as is class consciousness.  We must use all the means — all the forms of consciousness — at our disposal.

There is nothing more important than finding what Peggy Terry called “our natural allies in the struggle for real freedom and real democracy.” We can begin by seeking unity without uniformity and honoring the path each person takes to political life.

Once we shift our vantage point, even partially, from abstract analysis to on-the-ground activism, culture and consciousness come to the foreground and cannot be denied. When we take up the revolutionary act of talking to strangers, we find pretty quickly that there is no uncomplicated point of engagement. It’s rarely class interest pure and simple. All the deep contradictions of our culture and history govern the organizing encounter.

To dismiss white identity is to take our eyes off one of the main obstacles preventing working people from building the power we need to transform America into a democracy free of war and corporate power.

Waves of Revolution, Waves of Whiteness

In American history our revolutionary traditions have been kept in check and elite rule restored by wave after wave of white identity politics.

As Ted Allen taught, the white race and racism, invented in tandem, were the reaction to a peoples’ uprising that was both multiracial and cross-class. During Bacon’s rebellion, people of African and European descent — united by a shared experience of servitude and hard labor — joined forces and occupied Jamestown the capital of Virginia colony. With the help of free but landless people and a few small landowners, they rose-up against slavery. After the elites crushed the rebellion, the white race was invented and the solidarity on which revolution depends was crushed as well.

After 1776 — when the ideal of equality was at least put on the agenda of history — whiteness and slavery betrayed the promise.  We lost the chance again in the 19th Century when millions of Irish — fleeing their own horrible oppression — migrated to the new republic but wasted their fighting spirit. Our ancestors sold their class struggles short by settling for whiteness as their meal ticket and assimilation into the “white man’s country” they newly called home.[1]

After the revolutionary phase of the Civil War and Reconstruction destroyed slavery and challenged white supremacy, Jim Crow and Klan terror once again restored white identity as the permit that granted political participation. In the end even the mighty Populists succumbed to racial division.[2]

The transformative revolution of the mid-twentieth century destroyed Jim Crow’s legal segregation and challenged empire. For the first time in our history anti-racist ideas gained acceptance by millions of white people. But in the following decades, a vast militarized penal system — operating under cover of crime-fighting and colorblindness — targeted people of color, reinventing Jim Crow and slavery.[3]

Trump now openly invites us back to white identity by scapegoating immigrants, blacks, latinos, natives and women to divert our attention from the real culprits: empire, corporate power and mass incarceration.

Whiteness Won’t Be Wished Away

We have a daunting history no doubt but we have had our revolutions and we shall have another. For now there is deep discontent among white workers. The corporations with their insatiable drive for power and profits, the empire with its multiple and endless wars, the two-party system with its frauds and fakers and a labor movement too often timid, too often hobbled by blind obedience to the machine, have led us to down the road to political and environmental disaster. It is time for white workers to rise up.

For organizing purposes — and that is the only purpose that really matters — class should be engaged as both a relation to production and a form of identity.  And engage we must because the Republicans, KKK, and fascists clearly understand that white identity exists.

Ignore white identity and we surrender that ground to the right.  Organize white identity around class issues and anti-racist action and we step closer to the day when whiteness itself will be overcome. All the wishes in the world will not make whiteness go away, it must be transformed through the hard work of raising consciousness and raising hell.

Enter the Young Patriots Organization, Redneck Revolt and the Portland Uprising. This is how it’s done. Go with them. Learn and teach others.

If we can transform ourselves we can change the world. Listen to the words of the great civil rights anthem sung by the great working-class hero Bruce Springsteen:

3 Michelle Alexander, The New Jim Crow: Mass Incarceration in the Age of Colorblindness.

8 Responses to Whiteness Won’t Be Wished Away