Up Against the Wall: Corporate Power and Empire 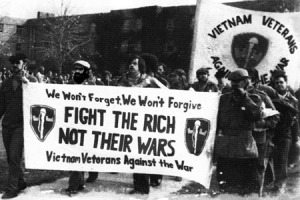 Eight in a series of ten posts on MLK.

[T]he Black revolution is much more than a struggle for the rights of Negroes. It is forcing America to face all its interrelated flaws—racism, poverty, militarism, and materialism. It is exposing evils that are rooted deeply in the whole structure of our society. It reveals systemic rather than superficial flaws and suggest that radical reconstruction of society itself is the real issue to be faced.[1]

King repeatedly identified the “giant triplets:” racism, materialism/exploitation/poverty and militarism. This post suggests a slight revision of two of the triplets I believe still in keeping with King’s vision.

The Corporate Power is immense economic wealth merged with unrivaled political might. Corporations govern.  The Corporate Power is the only form of capitalism worth taking about except that we do need a useful historical understanding of the long-gone free market and how earlier forms of capitalism were based on slavery, class exploitation and many other forms of conquest and domination.  But, there is no system in existence today — save the Corporate Power — responsible for the materialism/exploitation/poverty that King understood as racism’s “kin.”

US Militarism is not simply a body of ideas, or a culture of war, or policy decisions, or economic dominance, although it is at least all four. Militarism in our time is a structure — hard and fast. US elites control a global fortress of approximately 800 military bases. A system such as this —created by any other country, in any other historical period — would have but one name: Empire. And we can see — in how and where this Empire fights wars — an institutionalized racism equaled only by the vast militarized penal system that has finally gotten our attention by the uprisings, protests and disruptions of the new civil rights movement.

Racism, The Corporate Power and Empire — now that’s one mean-spirited brood of triplets.  But, back to our story of King and the Civil Rights Movement.

War, What is it good for?

After Selma and the passage of the Voting Rights Act the movement turned to ever more challenging tasks but every attempt to root our racism became entangled with other great problems: war and economic exploitation.

King became one of America’s most powerful voices against war. In 1967 his address at Riverside Church in New York City, “A Time to Break the Silence” was one of the most visionary yet effective speeches made on any topic in the 20th century.

“Our only hope today lies in our ability to recapture the revolutionary spirit and go out into a sometimes hostile world declaring eternal opposition to poverty, racism and militarism.”[2]

King’s entire moral, political and intellectual life was inseparable from his opposition to war and empire. His dissent, and those of other Civil Rights and Black Power leaders of the day, broadened the anti-war movement and had a decisive impact on African-American solders and veterans who played important roles in resistance to the Vietnam War.

Part of King’s global appeal was his understanding the so many of the problems of Latin America, Africa and Asia were the result of western colonialism and the continued exploitation by corporate investment.

“Americans in particular must help their nation repent of her modern economic imperialism.”[3]

King took a lot of heat from many in the Civil Rights movement for his anti-war and anti-imperialism but would not retreat.  He knew then what has become increasingly obvious:

[T]hat America would never invest the necessary funds or energies in rehabilitation of its poor so long as adventures like Vietnam continued to draw men and skills and money like some demonic destructive suction tube. So I was increasingly compelled to see the war as an enemy of the poor and to attack it as such.

And do not the wars continue endlessly with the same results?

The Political Economy of The Civil Rights Movement

After 1965 or so King became the truest of  labor leaders, one that advocated for the entire working class, not just his members. And, it can never be forgotten that he was assassinated while supporting a strike of sanitation workers.

What is stunning by today’s standards is the sweeping nature of King’s plans, vision and proposals. He proposed programs for poor people drawn on the grand scale of the Marshall Plan or the GI Bill.

King was killed before the movement could occupy Washington DC with a multi-ethnic encampment called the Poor Peoples March. The Poor Peoples march was the first massive embodiment of how fighting classism had to be part of fighting racism — about how organizing around the shared economic interests of the working class — black, white, native, asian and latino was an essential direction for future movement building.

King was gone but his vision leads us to challange corporate power.

Who owns America? Now we know it’s the 1%. But King dug deeper still.

All men are interdependent. Every nation is an heir of a vast treasury of ideas and labor to which both the living and the dead of all nations have contributed. Whether we realize it or not, each of us lives eternally “in the red.” We are everlasting debtors to known and unknown men and women.[5]

King tried to subvert the common notions of property rights and profit motives that are the cultural and economic foundations of corporate power. The earth — our first and truest commonwealth — should not become the private property of a few. And, who does the past belong to?  It is the labor of human beings — “living and dead,” “known and unknown” that is also commonwealth — a wealth we all should protect and spend wisely.

We must create full employment or we must create incomes….[W]e need to be concerned that the potential of the individual is not wasted. New forms of work that enhance the social good will have to be devised for those for whom traditional jobs are not available. In 1879 Henry George anticipated this state of affairs when he wrote, in Progress and Poverty: “The fact is that the work which improves the condition of mankind, the work which extends knowledge and increases power and enriches literature, and elevates thought, is not done to secure a living. It is not the work of slaves, driven to their task, either by the lash of a master or by animal necessities. It is the work of men who perform it for their own sake, and not that they may get more to eat or drink, or wear, or display. In a state of society were want is abolished, work of this sort could be enormously increased.”[6]

Kings anti-poverty strategy recognized that the relationship between work and reward, and between work and economic necessity, had already been altered.  Mass production had abolished true scarcity.  The corporations themselves had already made political power  — not hard work — the path to wealth.

This is a boon to humanity that  the corporations hoard for their class alone.  Do we have the courage and ability to take it for all of us?

If the billionaires and corporations can lay claim to almost all of the productivity gains of the last half century it is because they have the political power to separate work from reward — but only in their favor. If they can impose austerity upon us while holding trillions of dollars out of circulation — then austerity and poverty is a matter of political power and policy not economic necessity. King saw that, finally free from economic necessity, guaranteed jobs or guaranteed income was an achievable, if monumental, political project.

Not only did King point the way toward the end of wage-slavery but his political and intellectual journey proves that race as a category of analysis and action was not just central to politics but in all respects universal and revolutionary in scope and consequences.  As the movement approached the threshold of the “radical reconstruction of society itself,” the struggles over race, class, and empire began to fuse into a broad revolutionary surge that included all, but was greater than the sum of its parts.

And, King knew full well that the movement had crossed beyond the liberal consensus and into revolutionary territory.

Exactly one hundred yeas after Abraham Lincoln wrote the Emancipation Proclamation for them, Negroes wrote their own document of freedom in their own way. In 1963, the civil rights moment coalesced around a technique for social change, nonviolent direct action. It elevated jobs and other economic issues to the summit, were earlier it had placed discrimination and suffrage. It thereby forged episodic social protest into the hammer of social revolution.[7]

As we know, that stage of the revolution failed. King, the civil rights movement and other social movements of the day failed to win a lasting peace, let alone transform the empire into a democratic republic. They, and all the movements since, have failed to achieve a decent measure of economic justice let along transform corporate power into economic democracy.

Yet, there is something vitally important to be learned from these failures.  Organize!

Next: Where Do We Go From Here?

Richard Moser has over 40 years experience as an organizer and activist in the labor, student, peace, and community movements. Moser is author of "New Winter Soldiers: GI and Veteran Dissent During the Vietnam Era," and co-editor with Van Gosse of "The World the Sixties Made: Politics and Culture in Recent America." Moser lives in Colorado.
View all posts by Richard Moser →
This entry was posted in American Culture, Martin Luther King, Strategy and tagged Martin Luther King, Movement Strategy. Bookmark the permalink.