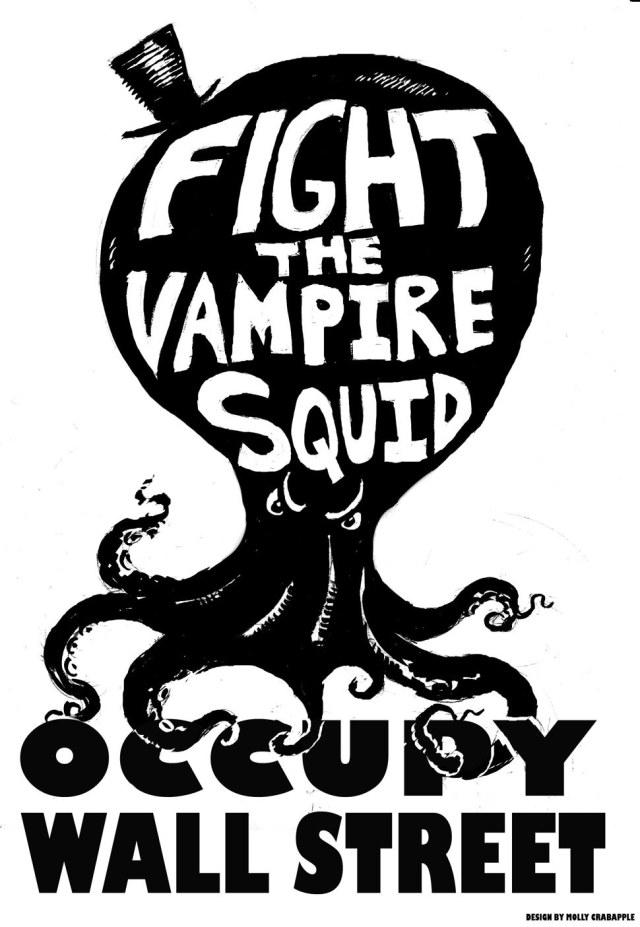 In the race for New Jersey Governor Democrat Phil Murphy is way up in the polls against a weak Republican challenger.  With money and machines both aligned in Murphy’s favor New Jersey faces yet another non-competitive election.

To spice up a bland campaign, Murphy has positioned himself to run — not against Republican Kim Guadagno or Green Seth Kaper-Dale — but against Donald Trump.  In repeated statements on his website and in TV advertisements Murphy claims he will stand up against Trump. This is doubtful, unless you believe that Goldman Sachs is ready to take on Goldman Sachs.  Murphy will likely “take on Trump” the same way Christie was going to “shake things up” in Trenton and Trump was going to “drain the swamp.”  Which is to say not at all.

Goldman Sachs vs. the People

Goldman Sachs is the most politically active financial institution in the US and has  earned the nickname “Government Sachs.” Whether it’s a Democratic or Republican administration, Goldman continues to wield power and win influence despite being the protagonists of the on-going 2008 economic crisis.

The stage was set for disaster when Goldman pumped up the sub-prime mortgage market which they knew was highly risky.  They hawked so-called “derivatives” — investments made up of these bad debts — to insurance companies and pension firms, while betting against these same clients who had bought the tainted products Goldman promoted.

When the financial giants fell, global shock waves rolled out of New York City destroying an estimated $19 trillion of wealth in the US alone. Millions of homes, pensions and jobs were lost. The worst crash since the Great Depression devastated the working class with African American households losing half of their wealth.

Former Goldman executive and Bush’s Treasury Secretary, Henry Paulsen made sure Wall Street was insulated from risk by arranging massive bailouts from the US taxpayer to the very banks that had instigated the crisis.

Only in 2016 did Goldman Sachs quietly pay out $5 billion for wrongdoing. Informed observers claim that the penalty is itself another sham and that the actual fine is going to be far less.   To this day not a single Goldman Sachs executive has been indicted for crimes, let alone gone to jail. Goldman made billions every step of the way.

Murphy’s vast personal fortune comes from the astronomical pay package he was  entitled to as a Goldman executive. Murphy made his political connections over the course of his 23 years at Goldman Sachs.

As reported in The Nation:

Murphy’s Goldman connections were instrumental in his transition from Wall Street to politics. “He is a close confidant of former treasury secretary and Wall Street veteran Robert Rubin…” reported the German weekly Der Spiegel….“It was through his connection to Rubin that Murphy began working as a Democratic Party fundraiser.” Murphy also had ties to Michael Froman, Rubin’s chief of staff at the Treasury. According to WikiLeaks, in 2008, it was Froman who recommended to John Podesta, then overseeing Obama’s transition, that Murphy get a top job in the administration.

Murphy returned to the New York headquarters in 1999, just as the firm—and Wall Street—were undergoing a dramatic transformation. That was the year Glass-Steagall was repealed and a ban was placed on the regulation of derivatives. Both moves were orchestrated by Robert Rubin, the Clinton administration’s Treasury secretary and another Goldman Sachs alum…

While Murphy bankrolled the hedge funds with billions for their gambles, his confidant Robert Rubin turned Wall Street into a casino. Murphy’s colleagues on Goldman’s elite management team were Henry Paulson and Gary Cohn.  Paulson orchestrated the largest Wall Street bailout in history and Cohn fueled the sub-prime mortgage market. Today, Cohn is calling the shots for Donald Trump.

This is how “Government by Goldman” rolls.

Now Murphy claims he will take on Trump. This is hard to believe when Trump –more than any other president — is himself surrounded by former Goldman Sachs executives.

The most powerful is Gary Cohn, who is Giving Goldman Sachs everything it ever wanted from the Trump Administration.

The Trump economic agenda…is largely the Goldman agenda….If Cohn stays, it will be to pursue an agenda of aggressive financial deregulation and massive corporate tax cuts — he seeks to slash rates by 57 percent — that would dramatically increase profits for large financial players like Goldman. It is an agenda as radical in its scope and impact as Bannon’s was.

The Trump economic agenda is the Goldman Sachs agenda — created and pitched by Gary Cohn and Steve Mnuchin.

Money Makes the Machine Go Round

Murphy has made no effort to get money out of politics.  The reality is just the opposite: Money Won.

Instead of following the example of Bernie Sanders or Seth-Kaper Dale in refusing corporate donations, Murphy’s campaign would have been a big nothing without his Wall Street fortune. Murphy’s investments made $7.3 million in 2015 alone. He relied on personal wealth to win the nomination.

Big money was decisive.  Murphy paved the way by donating at least $1.15 million to state and local Democratic organizations since 2001. As early as October 2016, Murphy had put up $10 million for his own campaign.  “He’s raised another $613,000, with 30 percent of that coming from people once associated with Goldman Sachs.”  By the time the primary was over Murphy had spent “$21.7 million — or 64 percent of the $33.7 million spent by all the contenders put together. He loaned his campaign $16.3 million.”

Once in the general election Murphy shifted gears and went for the public matching funds that gives him tax dollars while limiting his spending and personal loans to his own campaign. But, the program sets no limits on the spending of outside groups.

Chief among those outside groups is the Democratic Governors Association.  A September 25, 2017 fundraiser has revealed both the influence of money and the cozy relationship between Murphy and the old-line Democratic machine.  According to Observer.com:

The Cherry Hill event is a collaboration between Democratic gubernatorial nominee Phil Murphy and South Jersey power broker George Norcross. Tickets were $2,500 per person, but the invitation noted that the DGA can raise unlimited amounts from U.S. donors.   Murphy and Rep. Donald Norcross (D-1) shared top billing…and another Norcross brother, lobbyist Phil Norcross, was one of the hosts.

Murphy and the Norcross trio. It’s both money and the machine but its also more than that.

Although Murphy has never held elected office he did “serve” New Jersey.

In 2005, then-Gov. Richard Codey appointed Murphy chair of a task force on New Jersey’s pension crisis. One of his recommendations was to sell off public assets, which Corzine proposed but failed to get passed. He also suggested raising the retirement age and base pensions on a longer salary window, both of which were later put into effect. [emphasis added]

And who would put the recommendations into effect? Chris Christie, that’s who. And, of course, his Democratic enablers, Steve Sweeny and Sheila Oliver.

So Murphy’s script is Wall Street’s script: privatization of public assets and cutbacks to workers. The report did not recommend stopping tax breaks to corporations, reforming regressive tax structures or identify universal health care as the best solution to our budget problems.

Instead Murphy recommended “sacrifice.” It’s the same language used by elites to win concessions from workers following the 2008 crash. Did Goldman Sachs sacrifice? In the third quarter of 2007, when every other big bank showed huge losses, Goldman Sachs reported a $2.9 billion profit.  Former Goldman Sachs executives have held positions of immense power in the Treasury, Federal Reserve and as economic advisors to Presidents Clinton, Bush, Obama, and now Trump.

“Shared sacrifice” is for suckers and adverse interest is the sucker-punch.

Adverse Interest and the Lesser of Two Evils

“Adverse interest” is when someone claims to “have your back” while they are stabbing you in the back.

Goldman Sachs claimed it was acting in the best interests of its clients. It clearly did not. They made billions betting against their own clients.  The Democrats and Republicans claim to represent the American people. They clearly do not. Their real interest is the billionaires and big corporations, and no one else.

American democracy has been ruined because we have accepted a no-win situation. Lesser-of- two-evils voting is the terms of our surrender. Which former Goldman Sachs executive will deliver prosperity?  Which faction of the secret police will protect us: the FBI, the CIA or the NSA? Should we vote for the vulgar racists that call the fascists forward or the systematic racists hiding behind Wall Street, endless war and mass incarceration. Which of the two bankrupt parties will lead? The lack of real democracy leaves us with a servant’s choice: do we want a kindly master or a cruel master?  A truly free people would have no masters at all.

Instead we must only vote for parties and candidates that actually represent our interests and values. That is, after all, what representative democracy is supposed to be about.

Richard Moser has over 40 years experience as an organizer and activist in the labor, student, peace, and community movements. Moser is the author of "New Winter Soldiers: GI and Veteran Dissent During the Vietnam Era," and co-editor with Van Gosse of "The World the Sixties Made: Politics and Culture in Recent America." Moser lives in Colorado.
View all posts by Richard Moser →
This entry was posted in Corporate Power, electoral strategy, History and tagged Corporate Power, Democratic Party, electoral strategy, Green Party, History. Bookmark the permalink.