The March 15 Primaries and St.Patricks Day?

I usually avoid doing news commentary because I am not good at it. But, here are some quick and dirty observations on the March 15 primaries.

In all cases but one Sanders outperformed the polls. The delegate split was not what we wanted but not an overwhelming defeat by any means.

The defeat in Ohio was awful but some unknown number of Democrats crossed over to the Republican side to vote against Trump. Switching is allowed under Ohio law. This demonstrates the weakness of both the “lesser of two evils” and the politics of fear.

Sanders loses in Chicago despite the recent powerful and important movement against Trump. Chicago is famous for electoral corruption. Major Emanuel’s machine and the conservative unions (AFT,NEA,SEIU, AFSME) are heirs to a well-established vote producing apparatus.  They have power, patronage and jobs to dispense.

The rural and southern part of the state, historically more “southern” in culture nonetheless votes for Sanders. He is reaching voters not connected to the status-quo machines.

Western North Carolina is the Appalachian region. Generally whiter and poorer that the rest of North Carolina and it was Sander’s only stronghold in the state. It shows that the white working-class, far from the conservative machines, will vote for a real reformer rather than a fascist. Cheers! We have been waiting for the white working-class to wake up and this is a very good thing.

Also worth noting that Swain county, also in the same pro-Sanders Appalachian region, includes the Cherokee reservation, one of the most populous native reservation east of the Mississippi.

In Florida some 3.2 million independence are shut out of the closed primary system and independents tend toward Sanders. Sanders only wins counties in the panhandle, another good inroad into Trump and Clinton territory and indication that working-class people are waking up.

And Keep in mind the Florida has one of the most corrupt histories in the country when it comes to elections. Remember when Jeb stole the 2000 election? Ex -felons are barred from voting for life in Florida for example, the only state to do so.

And Missouri, one of the more culturally “southern” and culturally conservative of the “northern” states is a dead heat. Again showing the potential reach of the message of  that the economy and political system are rigged regardless about our assumptions about demographics.

We know the Clinton machine is one of the most deeply entrenched political organizations in the world. They have the status quo, power, jobs and patronage.  Changing this will not be easy.

The Wild Irish lived “Beyond the Pale.” Outside of the control of the British Imperial system.

Sinn Féin, the name of leading party for independence is translated as “we ourselves.”

“Tiocfaidh ár lá” a legendary Irish saying is  “our time will come.”

We have each other and our ideals and maybe, just maybe, our time has come.

The Great Only Appear Great Because We Are On Our Knees: Let Us Rise! — James Connolly. 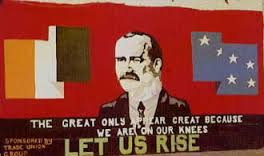 Richard Moser has over 40 years experience as an organizer and activist in the labor, student, peace, and community movements. Moser is author of "New Winter Soldiers: GI and Veteran Dissent During the Vietnam Era," and co-editor with Van Gosse of "The World the Sixties Made: Politics and Culture in Recent America." Moser lives in Colorado.
View all posts by Richard Moser →
This entry was posted in Uncategorized. Bookmark the permalink.

1 Response to The March 15 Primaries and St.Patricks Day?