Russia-gate: The Dead But Undead

Attention all Russia-gaters! Under the cover of pandemic, the US finally dropped charges against those dastardly Russian meme-bombers!

Just in case you think this is yet another conspiracy led by Trump’s DOJ to hide something, the case against the troll farm fell apart 2 years ago when Mueller was still in charge. It’s been in limbo ever since but as the trial approached the DOJ killed the case. In a sane world, this would be the final nail in its coffin but the Russia-gate zombie is useful — so it rises again.

In May 2018, Concord Management, one of the indicted firms, pleaded innocent and went to court to clear its name. Concord’s lawyers had the audacity to ask for evidence as part of the normal legal procedure of “discovery.” Discovery means that both parties must exchange all the information and facts relating to the case at hand. Otherwise, legal defense is impossible.

Since we have no extradition treaty with Russia, the troll farmers could have safely stayed in Russia. Apparently, Mueller was betting that would be the case.

Who would be foolish enough to voluntarily come to the US to stand trial for one of the most notorious crimes of the century? Well, Concord Management did; they called Mueller’s bluff.

In a propaganda campaign filled with one “bombshell,” after another, these events were so underreported that many people never heard of them. Why? Well, this bombshell blew up the Russia-gate narrative. And when reported at all it was spun as yet another Russian attempt to weaponize “secret” materials.

Mueller’s double-speak as to why he suspended the case is identical to what the DOJ’s spin is today. Both Mueller and the DOJ are saying that to release the evidence of a threat to national security is itself a breach of national security — a threat that outweighs the alleged Russian meddling. In other words, informed Americans are more dangerous to the security of the state than Russians. This is completely in keeping with Edward Snowdon’s revelations about massive domestic spying.  As quoted in the Guardian Snowdon said:

Like the NSA, both Mueller and the DOJ’s actions treat the American public as if we are their targets. Police actions speak louder than police words

We can only conclude that Mueller never intended to prosecute the only example of Russian influence he could come up with.

No weapon as potent as Russia-gate will be put to rest over the lack of a little thing like evidence.

Who does Russia-gate serve? Who does this cover-up serve? It serves the purposes of the state. The intelligence community — of which Mueller is a leader — has seen itself as the gatekeepers of what the public should know and believe since the 1950s. Russia-gate serves the purpose of this once-hidden force that has now become a powerful and independent actor in American politics.

Recent events reveal the increasingly overt meddling and intervention of the secret police forces in domestic affairs. Here are a few choice examples.

On the eve of the Nevada primary, the Washington Post tells us that the Russians are helping Sanders. Who says so? The police. How are they helping exactly? The police could not say.

Ever the faithful servants of the state, the New York Times piled on with more Russia connect the dots smears on Sanders. Bloomberg carried the slander into the debates. Hillary Clinton, one of the architects of Russia-gate, smeared Tulsi Gabbard as a Russian asset, who, in a rare act of political courage, sued Clinton and waged a public counter-attack on Russia-gate and the abuses of the intelligence agencies.

Soon after, on the eve of Super Tuesday, a joint statement from eight police agencies made yet another fact-free intervention in the election by — you guessed it — warning about election meddling. It seems the intelligence community is more interested in king-making than finding out about the coronavirus. Apparently, subversive thoughts are far more dangerous than pandemics for the security of the state.

Then comes the Biden endorsement. In what The Washington Post called a “break with tradition” 100 former intelligence agents and other members of the national security state have publicly endorsed Biden. As quoted in the Independent:

“Margaret Henoch, a former CIA officer…agreed that a public endorsement is “absolutely” unheard of for career professionals.”

And leading this unheard-of endorsement is James Clapper. As former Director of National Intelligence, he was boss of all 17 secret police forces. Clapper is an unindicted perjurer that lied to Congress about the massive spying on everyday Americans by the National Security Agency. As reported in the Independent, Clapper repeats the core message of the Biden campaign:

“I just think he would represent if elected, a restoration of normality to the country,”

Dude knows how to toe the party line and to deceive. Whether its “Normality,” or MAGA any return to the past is simply not in the cards. “Normal” cannot be purchased at any price or with any degree of power. Mother nature will see to that. The pandemic is just a prelude to irreversible climate chaos. Ten years — tick, tick, tick.

Break with Tradition or Abuse of Power?

It is not simply a break with tradition but yet another step in the long history of the abuse of power. The executive branch has grown so large, it has overwhelmed anything even resembling the Constitutional separation of powers or checks and balances. We have the empire to thank for that.

And since 9/11 the power of the intelligence community has grown even greater. The Patriot Act and Foreign Intelligence Surveillance Act institutionalized police powers to spy on all Americans. In words we could apply to the pandemic crisis, the American Civil Liberties Union states:

“In the aftermath of the September 11th attacks the FBI sought to rid itself of these legal restraints and expand its investigative and intelligence collection capabilities. Acting during a period of fear and uncertainty, Congress, the White House, and the attorney general gave the FBI enhanced investigative and surveillance authorities…Other powers the FBI simply assumed for itself, often secretly, and at times in direct violation of existing laws.”

Who and what benefits from Russia-gate? The corporate state and its need to destroy what little remains of our human rights.

Russia-gate works to distract us from our own problems; divide the progressive movement and set strict limits on dissent. Even Sanders pays tribute to the very weapons used against him by repeating the Russia-gate mantra. For a campaign so focused on completing the mission of the first New Deal, it is a self-inflicted wound. The first New Deal remains unfinished precisely because of Russia-gates’ predecessors: the Cold War and McCarthyism.

The most effective assault on the New Deal was aimed directly at the working class. The 1947 Taft-Hartley Act (which even the Cold Warrior President Truman called the “slave-labor act”) purged the socialists and communists leading 18 CIO unions, banned key tactics and strategies and promoted “right to work” laws. 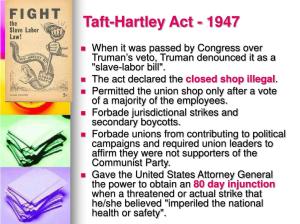 In the larger context, Taft-Hartley increased the power and rights of management while limiting all forms of workplace and economic democracy. Taft-Hartley was passed despite Truman’s veto by a powerful coalition of Democrats and Republicans. It’s the last major labor law “reform” this country has seen.

The second New Deal will not be born if we swallow the same poison that killed the first New Deal.

The collapse of the Russian collusion story also illustrates the total bankruptcy of the choices made by the DNC after 2016. They preferred the high drama and wild accusations of Russia-gate and the New Cold War to healthcare, election reform or positive programs of any kind.

Russia-gate’s aim is to enforce ideological discipline and silence criticism. But without criticism, people failed to learn the lessons of 2016. That failure is clear in the selection of Biden who represents the repetition of the old electoral strategy.

The war we are actually in will increasingly demand the creation of mass movements, coalitions of all kinds, local communal efforts, mutual aid networks, organizing projects and third parties especially now after the frontal assault on the Democrats and the Presidency seems blocked.

We face uncertainty, risk, and danger. But whatever the outcomes of this unpredictable pandemic and the chaotic, rigged Democratic primary may be — and even if Sanders can defeat the DNC and Trump both — any progressive political agenda will be in jeopardy without massive outside pressure. In any case, we need to outflank the ruling class with a mighty army of activists coordinated with but outside of the electoral arena.