Climate Crisis Means the Ruling Class has Failed. Can the Working Class Inherit the Earth?*

Power For Profit is Still the Prime Directive

The climate crisis is proof positive that the ruling class is an utter failure — but it will not fall on its own. Can the working class rise to the challenge? It sure will help if we understand that our class interests are not merely the economic needs of working people — no matter how important that is — but the universal interests of a healthy planet for all the people. Let’s start acting like it.

The corporate solutions to the climate crisis must dodge the causes of the crisis. The ruling class uses deception and secrecy to limit public debate. When the facts become obvious and overwhelming corporate politicians simply refuse to debate it. Gag rules are back in fashion. When the people demand a Green New Deal the same politicians water it down and disarm it. 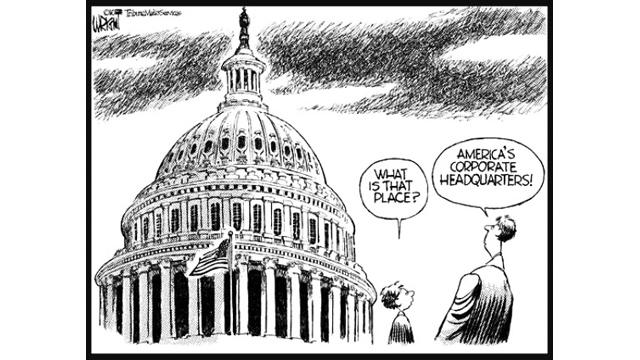 Meanwhile, the Corporate State pursues the only agenda it has ever known: power and profit. If we accept corporate empire as normal, natural or eternal there is nothing left but better management, technical fixes, adaptation, and illusions of endless growth.

Since corporate capitalism is a “grow or die” system, it cannot consider limits even at a time when planetary limits are on display for all to see and verified by our best science. For example, there is no place in corporate plans for the conservation of energy despite the fact that energy not used is the truest form of clean energy. Instead of keeping in the ground, it’s always more and more.

“I’m not disputing that increasing CO2 emissions in the atmosphere is going to have an impact…we believe those consequences are manageable….It’s an engineering problem and it has engineering solutions.[1]

Shell Oil tried those “solutions” by investing $5 billion on Arctic exploration betting that the melting ice caps would clear the way to new-found riches. The “grow or die” dynamic at the heart of capitalism pushes all the corporations into The Race for What’s Left. They cannot stop themselves because the quest for limitless profits compels limitless growth. No capitalist enterprise can opt out of the system for long and survive.

The latest liberal-sounding twist on the management and engineering ploy is for oil companies, the military, and elite think tanks like the Rand Corporation to push “adaptation and resilience” as a form of acceptance to climate catastrophe.

Meanwhile, the corporate state itself boosts yet another “gold-rush.” In fact, the US government led the charge to the “last great frontier” in this 2013 National Strategy for the Arctic :

“This strategy is intended to position the United States to respond effectively to challenges and emerging opportunities arising from significant increases in Arctic activity due to the diminishment of sea ice and the emergence of a new Arctic environment.”

“We will enable our vessels and aircraft to operate, consistent with international law, through, under, and over the airspace and waters of the Arctic, support lawful commerce….”

The government will respond to the “emerging opportunities” of a “new Arctic environment” to support “lawful commerce” with our military might. The new arctic gold-rush is the same as the old one, except now it threatens worldwide disaster. We can count on corporate power to double-down as the crisis worsens. And they are doubling down on us.

Their other plan is to suppress dissent. A new security industry grew dramatically after 9/11 to become a wing of the intelligence community and military. From Nigeria to Standing Rock, to Honduras environmental activists face militarized police and violent suppression including assassination and jail time. Since 2010, 1000 environmental defenders have been murdered, many of them native people. By 2017 nearly 20 States have considered making protest a crime. Protectors have been accused of being terrorists. Even old-line private armies like the Pinkertons have retooled themselves for climate change. There is no border between national security and business opportunity for oil cops and mercenaries who exercise the police powers and military duties of the corporate empire both at home and abroad.

Q. Whose Plans are These? A. The Ruling Class That’s Whose.

Yes, there is a ruling class. Here are just a few of its major features in regard to war and climate destruction.

While not without its fissures and fractures, the elites rule through a network of powerful institutions that consolidated power on a global scale by merging the state — the US government in particular — with the largest corporations. This fusion is the systematic foundation of the twin crises of war and climate destruction.

Since the corporate state seeks to use “all their means of power” they have effectively integrated the military, government, big oil, big media and big banks into the interlocking force of corporate power.

Here it is — straight from the Army’s mouth:

“Competition between contending groups using all their means of power has always characterized the international environment….Such competition involved all instruments of state power: diplomatic, informational, military, and economic…expanded in some recent policy documents to diplomatic, informational, military, economic, financial, intelligence, and law enforcement…”

The corporate state came of age as it assimilated “all instruments of state power” into its network.

A key connection, for example, is the deployment of banks and bankers, including the IMF and World Bank as weapons in the pursuit of common objectives — as was obvious in the recent coup attempt against Venezuela that also enlisted “informational” giants like Google, Facebook, and Twitter in the war effort. Even faux-environmentalist groups Nature Conservancy, World Wildlife Fund, and Environmental Defense Fund have taken money from and provided cover for the fossil fuel giants.[2]

The interlocking institutions work in many ways but one means is the so-called “revolving door.” The merger of finance capital with government has been well documented by Nomi Prins. This CBS News analysis lists the names of Goldman Sachs executives “at the highest reaches of power both in Washington and around the world.” Two recent reports by Public Citizen document the connections between Federal Trade Commission officials and the corporations they are supposed to regulate and the routine transfer of politicians to the front ranks of corporate lobbyists.

The same kind of dual office holding is business as usual for the military-industrial complex.

“As many as 380 high-ranking Defense Department officials and officers…left government to become lobbyists, corporate board members and defense contractor consultants….In 645 instances documented by the nonprofit Project on Government Oversight, officials went to work for major contractors—Boeing, General Dynamics and United Technologies are the top three—with nearly 90 percent of them doing lobbying.”

These officials are lobbying — they work connections. The “revolving door” metaphor fails to describe how corporate power is staffed. These politicians, bankers and generals are not moving in and out of anything. Instead, they are simply being transferred to different “duty stations” — to borrow a military term. Individuals play various roles as a means to develop the connections and gain the experience needed to seal the relationships between the interlocking institutions of the corporate state.

Oil money also greases the wheels making sure the political parties can function. At the pinnacles of power, a global ruling class of highly interlocked corporations showers US politicians with cash.

New research from sociologist Josh Murray reveals the inner workings of the global machine. Murray’s high-powered statistical analysis shows that the more interlocked with each other corporations are, the more they act as a coherent ruling class aware of their global class interest. It is precisely these highly connected organizations that have the strongest relationships with the US political system.

An interlocking system of corporations allows them to intervene in US elections as a matter of routine. Citizen’s United just legalized the system. It’s not the Russians, it’s corporate power. Give up the fantasy of free-market fundamentalism — it cannot be proven using evidence. Welcome to Corporate Power — it’s the only form of capitalism that matters — and we can see it all around us.

Will The Working Class “Inherit the Earth?”

The ruling elites have an organized class consciousness that thinks globally and acts globally. They use all the means at their disposal. How about us?

They have the corporation, we have the coalition. They already have a network of powerful organizations while we aspire, or should, to a “movement of movements.” Just as the ‘revolving door” cements ruling class ties we should aim to raise an army of “key workers” (a term we use in union organizing to find and support the real leaders) that can build the linkages between the peace movement, the climate movement, labor, and all the other social movements. There is not a single social movement or community that does not have a stake in the climate crisis.

Climate crisis is a revolutionary situation if we have the vision and audacity to make it so. We cannot continue to live or act in the old way and our rulers cannot rule as they have. Something has got to give. I have observed and participated in four decades of the perennial attempts to find ideological unity. We cannot agree on exactly what kind of class consciousness we are after or what socialism really means. We love to argue with each other — me too. But instead, we need to balance our ideological preoccupations with organizing. That means dramatically scaling up our engagements with everyday people and starting where they are not where we want them to be. Careful listening is the first step.

“The organizer’s rhetorical, strategic and tactical repertoire is designed to produce social action because it is in the tumult of political life that leaders emerge, relationships develop and transformations in consciousness are realized.”

Organizing also means learning to navigate and find strength in differences — because differences are the concrete conditions of our movement. Nothing — nothing — is ever going to change that. Perhaps we can move forward by developing a program that promotes on-the-ground unity in action without uniformity in ideas or analysis. Coalitions are designed to be just that — unity without uniformity. Here are some tips on coalition building.

We are held down by intersecting and mutually reinforcing structures of domination and hierarchy — empire, class, race, gender, age, sexuality and more. These codes and structures of dominion find their ultimate expression as the climate crisis. Perhaps we will be liberated by turning those same intersecting lines of oppression and exploitation into pathways of resistance.

[T]he perspective and political practice some of us currently call intersectionality is fundamentally ecological, is insisting on the organic, interactive, complex, and interdependent nature of oppression, and therefore, by both necessity and our own nature, of liberation…Each kind of oppression has its strategic importance in the reproduction of domination and props up the others, just as each struggle has moments of igniting a broader swath of resistance and leading that moment.” Aurora Levins Morales “Medicine Stories” p. 25-6.

If the forms of oppression intersect, then the forms of liberation must intersect as well. Each struggle, while rooted in the particular conditions of some people, place and time, offer lessons and produce resources that apply to everyone. The Red Nation gets right to it:

Our movement crisscrosses at the intersection of what is “simultaneously particular and universal.” If you are looking to the working-class for leadership you will know we are ready when we become “a class for itself” that is simultaneously on the way to becoming a class for the whole people and the whole earth. This way we can inherit the earth without owning it and receive its bounty without destroying it. This way we can win.

*Read the entire series on War is Climate Change.  Big thanks to Geoff Herzog for his editorial assistance and close reading of the series.

1/ Tellerson is quoted by Oscar Reyes in “Climate Change INC: How TNCs are Managing Risk and Preparing to Profit in World of Runaway Climate Change.” p 63, in Buxton and Hayes, The Secure and the Dispossessed

2/ Naomi Klein, This Changes Everything: Capitalism vs The Climate, pp 355-365