The Party is Over 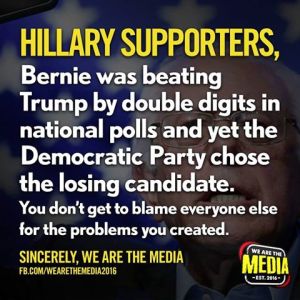 This article also appeared in Counterpunch.

Well, the party is over and the machine has prevailed. Our attempt to revive democracy in the electoral arena failed. Still, we owe Bernie so much. He has raised consciousness and expectations while others appealed to fear and told us there is no alternative to the corporate power. But, the struggle continues both within and outside the electoral arena.

The corporate elites and the Clinton machine have no idea how deep the divisions go. Trump not Clinton will most likely be the beneficiary of the election fraud, voter suppression and discontent. The DNC has made a historic blunder and it’s not going to be pretty either way. Fighting Fascism with the corporate power seems a doomed project since it is precisely the merger of the corporation and government that sets the conditions for the rise of fascism. That is the historical moment we are in and paradox we face.

There is already lots of suffering and there is going to be more; much more. We are just going to have to own up to what this country has become. The system is so rotten and dysfunctional that there is no easy way out. No amount of moralizing is going to change anything — that will take political action and organizing.

I plan on working for Jill Stein and I will count it a victory if we can get 5%. That will allow the Green party to get federal funding for next time and maybe help to create a viable opposition party. But this is no 20th century election. The trend lines on war, class warfare, propaganda, the failure of democracy and the vast militarized penal system all point toward deep trouble. On environmental issues alone the crisis will deepen and most likely in a dramatic way. We are woefully unprepared for what lies ahead.

But at least millions more have learned that the political system and the economy is rigged. That the lesser of two evils argument or the spoiler are forms of social control that have led us to exactly the choices we now have. If we do not have serious social change it is likely the Trumps of the world will just keep coming right out of the social conditions the Clintons of the world have created. I hear a lot from Clinton supporters, reluctant or not, about how they will continuing the struggle. I hope they are serious. How hard you worked for Bernie or other social movements this past year might be one indication of the value of your claims.

No one said revolution was easy, if fact its the hardest thing in the world. I hope mother earth has the patience for us to learn.

People will say I am privileged or childlike or a dreamer for dissenting. In some ways I am all three. And you? I listen to people’s claims of moral superiority, or paternalistic authority, or “realism” as they endorse and obey the political machine of the rich and powerful. We will all have to live with the consequences of our actions. All of us.

And, if you decide to persist in building an opposition movement, brace for a fear campaign unlike any you have seen. It’s all they has left.

“Fear,” Gandhi said, “is the enemy. We thought it was hate but it’s fear.”

Richard Moser has over 40 years experience as an organizer and activist in the labor, student, peace, and community movements. Moser is the author of "New Winter Soldiers: GI and Veteran Dissent During the Vietnam Era," and co-editor with Van Gosse of "The World the Sixties Made: Politics and Culture in Recent America." Moser lives in Colorado.
View all posts by Richard Moser →
This entry was posted in Uncategorized. Bookmark the permalink.

14 Responses to The Party is Over