On Organizing: Both Interest And Ideals 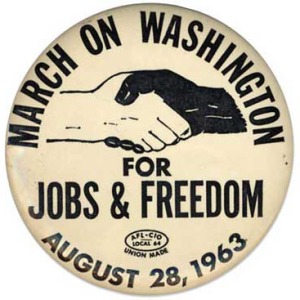 Fourth in the series: On Organizing

Both Interests And Ideals

Organizers usually accept the idea that self-interest is the best starting point for empowerment.  Unions are predicated on serving the interest of working people. Social movements too advocate the peoples’ many interests.  Yet self-interest is never enough.  If  the labor and social movements are to inspire people to great things, organizers must help people connect matters of immediate self-interest to enlightened self-interest, and ultimately with the great ideals of freedom, democracy, equality and justice.

History would suggest that social movements attain the potential for dramatic growth and social transformation only if they are able to convincingly connect self-interest with ideals and universal values.

Self interest is an important starting point because it is a generally accepted value within modern commercial culture and firmly grounds a person in the reality of the issues. A person with self-interest is much more likely to know the nuances and subtleties of the issue, and be more engaged for the long run, if more guarded about taking risks.

Fighting your own battles is a potentially transformative experience in ways that advocating for others rarely is.

Self-interested struggles come with considerable risks and convene an inner dialogue testing and extending the limits of courage, understanding and commitment. The workplace is a hostile environment where interests clash. Pursuing self-interest (given that its through collective means) is usually more difficult than fighting for ideals or the well-being of others although those are noble pursuits as well.

Self-interested struggles are incomparable learning experiences because the direct experience of risk and exposure to power reveals the discord between claims about freedom and democracy and hard reality of the unfree workplace. Deeply felt dissonance is an effective way to revise peoples established view of the world and makes possible the transformation of deferential workers or dues-payers into activists and citizens. Successful efforts also reveal the boss to be less than omnipotent and the people more capable than previously imagined.

Activists who have not taken the risks or had the experience of organizing their own workplaces or communities sometime in their lives will have difficultly understanding the people they are trying to organize no matter how good their education nor how radical their ideology.

Despite the value of self-interested efforts, the underlying theories of “economic man” (that people react rationally and logically to their class or economic interest) have been proven utterly bankrupt. If interests dictated behavior than how does one explain that millions of working class people, including millions of union members, vote for the Republican Party?

The Seeds of Solidarity

Good organizers seek to broaden self-interest into a community of interest by linking — first rhetorically then in organizing — the agendas of different constituencies. Enlightened self-interest is the pre-condition behind the cohesive relationships we commonly call solidarity. Enlightened self-interest exists when people realize that they must help others to help themselves. Solidarity begins when people understand that their job security will always be threatened unless everyone at work enjoys it. Solidarity grows when people realize that job security is a principle that should be universally applied not only because it could make them more secure but because it serves the public interest by introducing democratic practices into the workplace.

Since almost all workplaces are fractured by race, gender, age, sexuality and class (meaning either rank or occupational differences or multi-tiered labor arrangements), internal conflicts of interest abound. Every work force or community can be divided. Conflicts of interest are most apparent in the immediate and short-term issues such as the distribution of scarce resources. A community of interest is more apparent in long-term interests reflected in issues surrounding workplace democracy, job security or quality of work. To promote solidarity, the organizer should connect each campaign to the long-term interest of the whole work force, wider community, working-class or “the people”. Needless to say this is a long-term project.

On the day-to-day basis this take the form of resisting zero-sum approaches imposed by management that attempts to shift costs and risks between different groups of workers favoring one group then the other in an endless game of divide and conquer. Political favors to one group can become the basis for a setback for the wider community or workforce.

Employers and other elites rule not through bare-knuckle domination alone but by offering advantages to certain segments of the workforce. They count on our complicity. But, enlightened self-interest can help us see that some gifts can be detrimental to our shared long-term interests. The idea that a union’s mission is to always get the best deal for its members–no matter what–is all too common and easily plays into divide and conquer strategies.

Enlightened self-interest can bridge larger political efforts that need to evoke universal values to succeed. It is now obvious that no union-negotiated healthcare benefit in the United States is secure, because we do not have universal healthcare. The attack on private pensions systems and the weakening of social security are part of the same process of shifting costs away from corporations onto everyday people. Struggling for universal benefits is not just an altruistic luxury. Part of the current failure of US labor to satisfy the self-interested demands of members is a product of the historic collapse of enlightened self-interest.

Next: Interest and Ideals Continued

Richard Moser has over 40 years experience as an organizer and activist in the labor, student, peace, and community movements. Moser is the author of "New Winter Soldiers: GI and Veteran Dissent During the Vietnam Era," and co-editor with Van Gosse of "The World the Sixties Made: Politics and Culture in Recent America." Moser lives in Colorado.
View all posts by Richard Moser →
This entry was posted in American Culture, Movement Culture, Organizing Strategy, revolutionary strategy, Strategy, Uncategorized and tagged Movement Strategy, Organizational Culture, organizing, unions. Bookmark the permalink.