Weaving Our Garment of Destiny

Posted on September 5, 2015 by Richard Moser 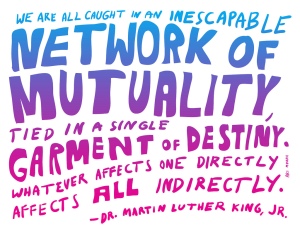 Weaving Our Garment of Destiny

All life is interrelated. We are all caught in an inescapable network of mutuality, tied into a single garment of destiny…We are made to live together because of the interrelated structure of reality.[1]

Interrelation, interdependence, cooperation, synergy, intersectionality and mutuality are not just moral concepts but the beginning of strategy — a strategy based on the kind of values that one day must prevail — or disaster.

Today our “garment of destiny” is woven of threads far more multicolored than in King’s day.  The innumerable consequences of the women’s movement, the many responses to the environment crisis, the searching struggles for sexual and gender alternatives and identities, and the decades old struggles against war and racism — all these and many more — have produced a richly variegated movement. We have created a new alternative American public.  Our dizzying diversity matches our potential reach and potential power.

King’s method of raising consciousness — finding the connections and interrelations between issues, movements and people — remains a vital vantage point. Simultaneously a civil rights leader, a labor leader and anti-war leader, King was one of the few people with the depth, range of experience, strategy and street cred to speak for “we the people.”

The vast array of movement activities, organizations and ideas is our garment of destiny. Our strategies should proceed from an appreciation of the basic connections between us all and seek out alliances and synergies.

As King suggested, strategies for social change should move toward a “both/and,” rather than an “either/or” approach — toward experimentation, inclusion, learning and diversity and away from polemic, moralistic politics and ideological correctness.

To weave our “garment of destiny,” we need to master the difficult art of “calling in.” Practice calling people in to organizing projects and community activities that confront and address the institutionalized structures of power. “Calling people out” may have its place from time to time. But, denunciation as political practice fortifies borders, reproduces exclusion, focuses on the negative, and imagines that all the deeply internalized thoughts we have about dominion — in all its forms — are simply in our heads.

The movement culture of “calling out” actually disarms us, divides us and minimized the task at hand. Dominion shapes our thinking so powerfully because hierarchical standards are reproduced and displayed daily by the culture of empire, racism and corporate power. Dominion and the blindspots, bribes, and privileges that are its instruments, are nearly impossible to be totally aware of, or resist, outside of a vigorous and truly massive social movement — a moment that can only be built by millions of deeply flawed, actually existing human beings.

Here is some good advise from Kai Cheng Thom on making the movement more humane.

To realize our “inescapable network of mutuality” will require the political skill to find unity without uniformity — coordination and unity in action — without uniformity in ideas, identities or ideologies.  Networks thrive at the intersection.

Go on down to the crossroads.  That’s the place to find a new America.

Richard Moser has over 40 years experience as an organizer and activist in the labor, student, peace, and community movements. Moser is the author of "New Winter Soldiers: GI and Veteran Dissent During the Vietnam Era," and co-editor with Van Gosse of "The World the Sixties Made: Politics and Culture in Recent America." Moser lives in Colorado.
View all posts by Richard Moser →
This entry was posted in Martin Luther King, Movement Culture, Strategy and tagged Martin Luther King, Movement Strategy, Organizational Culture. Bookmark the permalink.

2 Responses to Weaving Our Garment of Destiny