Conclusion to the Series “On Organizing:” Evolution to Revolution 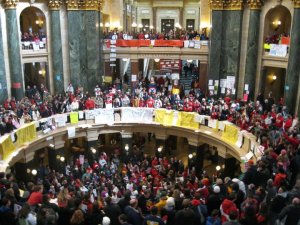 Last in the series: On Organizing

History Has Not Come To An End

The series “On Organzing” aims to help us learn from the challenging and confusing dialectical tension that is every organizers terrain and trouble.  Among the most productive problems we face can be understood as those between change and continuity, the personal and the political, ideals and interests, planning and opportunity, and the transitions from evolutionary to revolutionary  forms of unionism.

While these different versions of unionism discuss in “On Organizing” are not necessarily higher and lower stages of development it is difficult to envision how unions could aspire to social movement unionism without a history of solid service to its members, a strong ethical foundation and the kinds of experience that comes from struggling over the defense of the public interest.

Once we reconceptualize unionism in this way two approaches recommend themselves for resolving the tension between service and organizing and social moment unionism. First we should attempt to latch on to service functions and improve them by finding the organizing potential within them. That means that organizers must develop synergistic programs between organizing and legislative, grievance work, or negotiations. Usually grievance officers and lobbyists prefer casework or palace politics but that is the challenge. But by encouraging the participation of members, the organizer can avoid the zero-sum struggles for union resources and reconnect the lost link between organizing and the representative functions that were created by member activism decades ago.

Many unions already practice synergy by emphasizing community outreach by members during electoral campaigns, direct member interaction with legislators, member engagement with negotiations thought advisory committees, or face to face organizing teams that poll and educate members, or by entrusting union work, including grievances, to a shop steward type system. At first this may be more work for staff and leaders but in the long run could mobilize members and prove that organizing is not just about getting more members.

For us to go beyond just building an organization and to organize movements for fundamental social change we will need passage beyond the ancient theological model of either/or choices and static binaries so deeply embedded in convention radical thinking.

The inside/outside strategy depends on the creation of organizational centers outside the organziation that work in conjunction with clusters of interest and support inside. The “outside” organization becomes a safe home for activists and supporters to exchange information, develop strategy, publicize their agenda and make their case free from internal union pressures or organizational rivalries. The insider supporters funnel resources to the independent organization, legitimize its work, and bring its views into union discourse and practice.

It is the “outside” with its pressure politics and disruptions that we so lack today.

The key is to coordinate the efforts of people and organizations along a range of political and institutional positions. This tactical diversity and flexibility aims to create a push/pull dynamic edging the union toward more desirable activity.

In transformative organzing, the IOS also depends on the ability to travel between opposing, or what seem to be opposing ideas. Beyond either/or patterns of rejection or acceptance to learn from and include different political concepts and positions.

The ability to work within the multiple oppositional tensions I have described requires a certain degree of balance and calls on the organizer to master dialectical relationships through the art of dialogue, connection, and commensurability. Organizers are liminal figures that straddle political thresholds and borderlines: the “inside outsider,” the person with one foot in the community and one foot out, the “other” within.

The political passage, betwixt and between, is trod as the organizer helps a community live up to ideals agreed to in principle but unrealized in practice by struggling to do the same.

In “On Organizing” I have argued that organizers work in a world of contradiction. It is our goal to place these seemingly static oppositions in flux. To see the present in the light of the past, to find our personal lives embedded in the political world, to discover the connections between our particular interests and universal values; to both prefigure a better world and protest the existing one. This is how we reorganize the mind. Then maybe, fate will favor the prepared and social movements will build  the capacity to reach the many millions it takes to approach the threshold of revolutionary change.

Remember that history has not come to an end. It’s just that we cannot know its pace or foresee its twists and turns. Despite the triumphant claims of global elites that there is no alternative to the present regime, this, too, shall pass. If history is a credible guide, new possibilities may grow right out of the heart of corporate and imperial dominion.

Richard Moser has over 40 years experience as an organizer and activist in the labor, student, peace, and community movements. Moser is the author of "New Winter Soldiers: GI and Veteran Dissent During the Vietnam Era," and co-editor with Van Gosse of "The World the Sixties Made: Politics and Culture in Recent America." Moser lives in Colorado.
View all posts by Richard Moser →
This entry was posted in American Culture, Corporate Power, Labor Movement, Movement Culture, organizing, Organizing Strategy, revolutionary strategy, Strategy, Uncategorized, union organzing, unions, Working Class and tagged Movement Strategy, Organizational Culture, organizing. Bookmark the permalink.